This autumn I was taking TCP/IP course taught by professor Le Boudec. This time I learned something new, such as IPv6, interoperability between IPv4 and IPv6, more details about RIP and BGP, etc. Of which the most important I think are flow control and congestion control in TCP.

In another word, flow control is used to coordinate sending and receiving rate. If the sender is sending too fast, while the receiving application is processing slowly, the receiving buffer may not have enough space to hold the incoming data. Thus, there should be a mechanism to tell the sender to slow down.

Flow control is implemented in TCP through sliding window. In the three-way handshake period of TCP connection, the sender and receiver will negotiate the initial size of sliding window for each direction. The sliding window size will be updated on the fly.

Note that the difference between two sequence number indicates how many bytes are sent or received. The rule of sliding window is as follows:

If the receiving buffer is full, it would advertise sliding window size of 0 to the sender, to prohibit the sender from sending packets temporarily.

Congestion control is about resource(bandwidth) allocation and traffic regulation.

The TCP allocation is between max‐min fairness and proportional fairness. One trait of TCP protocol is that it favors connections with low round trip time(RTT).

Another theoretical result is that, among the linear controls, only additive-increase–multiplicative-decrease (AIMD) should be considered, that’s what the Internet is based on.

To implement congestion control for TCP, the protocol maintains a congestion window(cwnd) for each connection. Following rule is enforced by the protocol:

NOTE: rwnd means the size of flow control window advertised by the receiver.

The protocol also maintains another variable named slow start threshold(ssthresh). ssthresh is used to determine whether the protocol should enter slow start state or congestion control state. ssthresh is initialized to a large value.

When timeout happens, the values of ssthresh and cwnd are updated and slow start begins:

When fast retransmit happens, ssthresh and cwnd are updated and fast recovery begins: 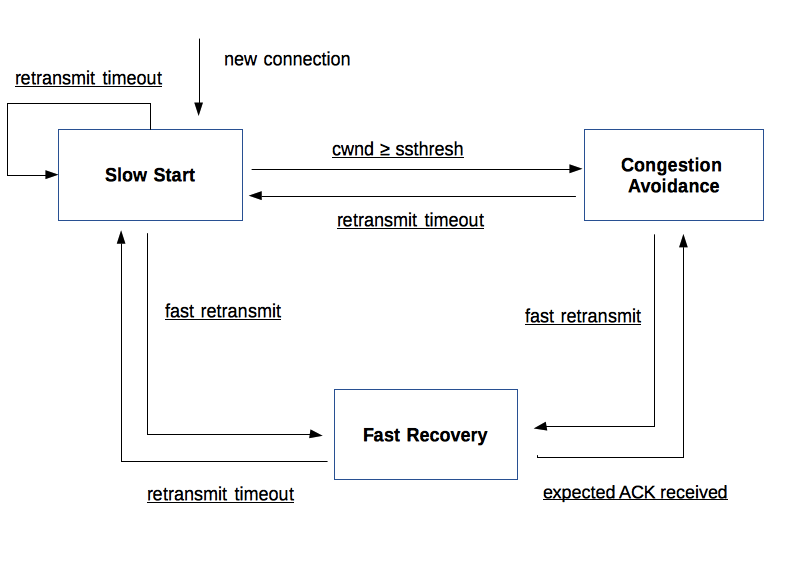